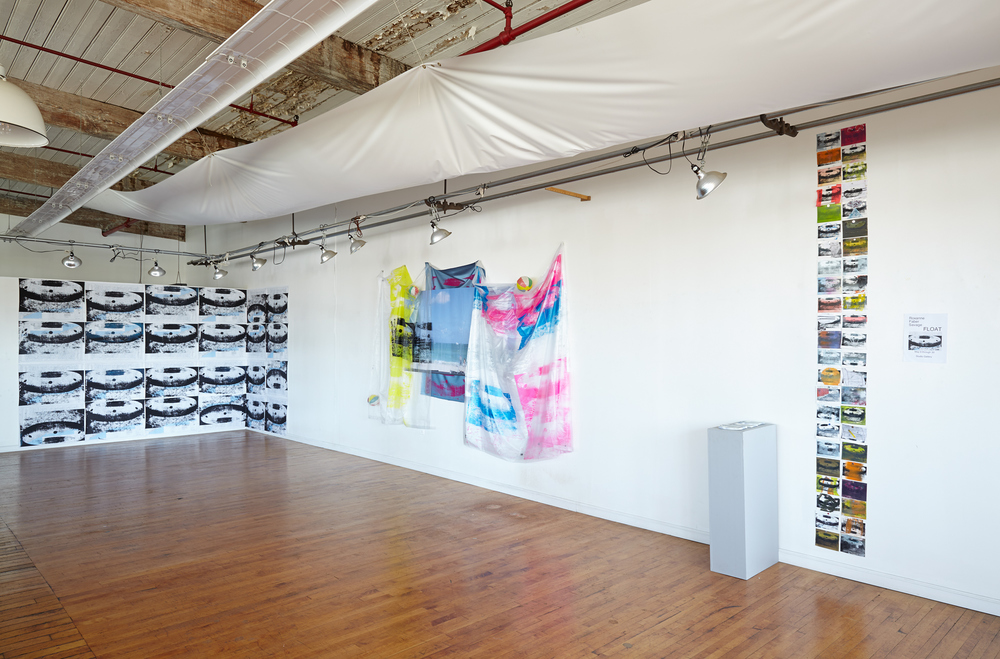 “Here’s to madness!” toasts Roxanne Faber Savage in the notes for FLOAT, her vibrant new installation now on view at West Cove Studio and Gallery in West Haven. Cue Susan Sontag’s cheery reply: “Sanity is a cosy lie.” And yet when discussing her work, Savage is nothing if not grounded. “I make art about basic life events, from the mundane to the seminal,” she says. “Images act as a bridge for me to explore intangible ideas and subconscious thoughts about the world.”

FLOAT unfolds in three acts, each on its own portion of wall. The first papers an entire corner with twenty-four high-contrast silkscreens of an inner tube printed on maps of Connecticut waterbasins. Sometimes the tube is upside down, sometimes the maps are flipped; the effect is an imperfect grid. In the background, routes and pale blue waterways marble the paper like veins. For all the technical precision of the maps, the pictures buzz with visual static: this image was generated by a previously inked paper lithograph plate, which Savage then digitally scanned and used to create a film for silkscreen. The result has the gritty quality of something eroding.


Stand in this corner and it’s possible to fill your periphery sight with endless inner tubes. Move closer and it fuses into an interlocking system of text, numbers, and printed halftones. The tube might be hovering above the map like a flying saucer, or a life preserver floating on its waters.


The installation’s middle is constructed of shower curtains silkscreened in pearlescent cyan, pink, and lemondrop yellow; it wittily resembles stage drapes opening on a perfect-day beach scene. Light glints off the plastic, highlighting bulges formed by readymade paper beach balls placed in the curtain’s folds. Compared to the previous tubes and their midnight hues, this version is all holiday. The curtains rustle in a breeze from the gallery’s open door. Yet the beach balls, which would drift on air or water if given the chance, stay sealed within the plastic. Savage has created a suspended moment: a playful work that keeps its toys trapped inside.

The last part of the triptych takes the inner tube to obsessive heights. Look up: a towering array of postcards, each manipulated in a different way. Scribbled on, painted or stamped, spangled with silver ink and masked in colored tape; the artist has become vandal of her own design. Savage is playing with color and repetition, but this is also an exercise in immobility. No matter how the tubes are individualized, each remains mid-drift without having moved an inch. They are tacked to the wall like Polaroids or flyers and conjure reoccurring dreams that twist and turn but always end the same.


Strikingly graphic, FLOAT is the latest iteration of themes Savage is exploring throughout her practice in works not currently on view. One example that has laid groundwork for this project is her Wonderball series—another search for the intangible in the inflatable. As in FLOAT, these solarplate prints of beach balls are slotted into their own close spaces; the spheres are squashed from the top and appear more square than round. Beach balls are designed for motion, bobbing on water or through the air. Here, we’re invited to consider their shape and texture from an unexpected angle and stillness. The delicate crimping around the valve, the lettering on the upper left corner: details like these lend the image a meditative quality. We contemplate the ball as a precious object instead of something commonplace.


When displayed together like jeweltone cakes in a bakery case, these wonderballs make an even stronger statement about the effects of color and repetition on our perception. If the FLOAT postcards resemble street posters splashed with graffiti, the wonderballs are pop—everyday sights elevated to importance, like Andy Warhol’s rainbow-hued shrines to soup and celebrity. All raise thoughts of mass production, advertisement, and logos aired repeatedly until their original significance fades and we can view them with fresh eyes.

FLOAT also showcases Savage’s experimentation with symbols. Spheres intrigue her, and the inner tubes are the latest in a sequence of moons, balls, and especially eyes that appear in her other compositions. The artist once printed eyes on small rubber balls and placed them in puddles; they gaze into a reflecting pool like tiny oracles and encourage us to see the mystical in the mundane. The black holes on her FLOAT inner tubes have a similar way of peering.


Other recent works feature angular shapes: prisms and pyramids arranged in elegant dreamscapes. Geometric structures rise from their foundations or are tethered by kite strings, like fantasies from the pages of Italo Calvino’s Invisible Cities. Some sail clear out of the frame. In these mixed media pieces, Savage shows us floating in a more airy, surreal way, contrasting with the heaviness we expect from this architecture and such stark mark making.

Eyes, inflatables, boxes, and wires; and, in earlier works, statues, birds, and powerlines—these are the runes of Savage’s private mythology. Interestingly, the phrase “private mythology” was coined in the 1920s to describe the work of Swiss-German painter Paul Klee, who, like Savage, repeated symbols to show the world’s balance of natural and mechanical.

FLOAT is about madness, writes the artist, and about “the challenges of staying afloat artistically, financially, emotionally, and physically.” Her contrasts and icons convey this visually as well as conceptually. Through her West Cove installation as well as the other works described, she reminds us of the dreams, relationships, and opposing forces that we navigate every day. The things that block our paths and make drifting along more difficult. And the breaks from sanity that we all need to let our imaginations freely glide. Savage says that she is interested in “freedom, energy, and the unconscious line.” More than anything, FLOAT represents an adventurous artist exploring her own buoyancy while taking her practice to new heights.


Roxanne Faber Savage currently lives and works in Connecticut and New York. See more of her work at www.roxanneprints.com.

FLOAT is part of the exhibition Two More at West Cove, on view May 9–30, 2015 at West Cove Studio and Gallery and A-Space Gallery, 30 Elm Street, West Haven CT, www.westcovestudio.org.

…IS IT MADNESS KEEPING US AFLOAT?

My muse – an “inner tube” is a donut, a flying saucer, or perhaps a corporeal body (like thing). I love its shape and the idea that if you reach for it while swimming you will float, but if it pops or deflates, you are out of luck. I think about staying afloat everyday. The artworks in FLOAT represent my way of conceptually and visually dealing with the challenges of staying afloat; artistically, financially, emotionally and physically.